This is the final month of redrawing Dyson’s Delve – today we get levels 9 & 10 of the redraw, and later this week I’ll be releasing the final level (11) as well as the all-new surface level of the mini mega dungeon.

At the end of this month, a PDF will be released to all patrons of the blog on Patreon (regardless of backer level) with the new version of Dyson’s Delve. 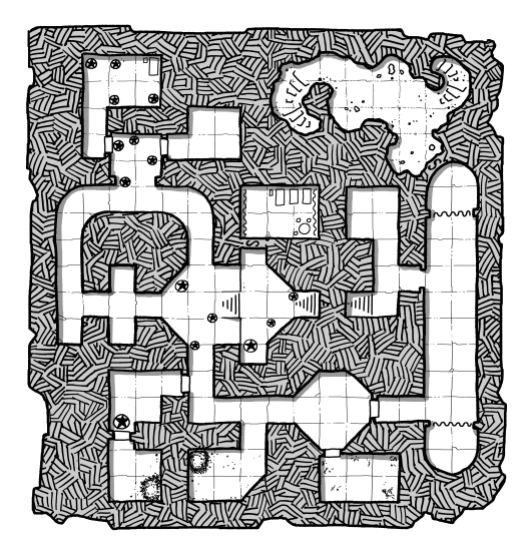 Level 9 is home to petrifying monstrosities, a “noble” court of wererats, and a massive worm (but not quite as massive as a purple worm – fortunately B/X D&D includes the smaller Caecilia which fills the same role while being a more appropriate challenge for this level).

The natural cave section on the northeast side of the map contains links up and down between the levels, and is also connected to the main level albeit through a secret door, essentially making these two sections separate. 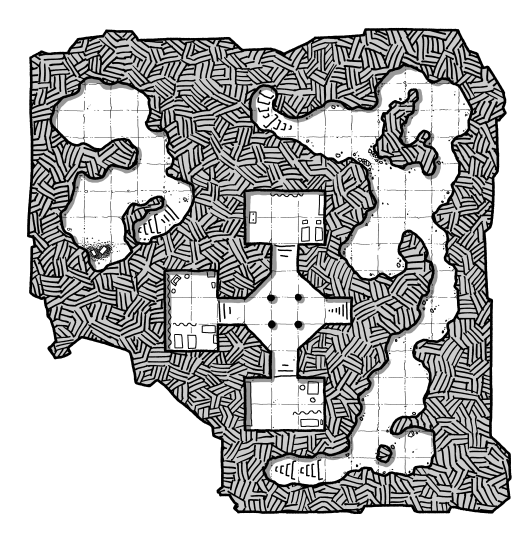 This level is unusual in that it is broken up into three distinct areas. One can only be reached from level 9, one from level 11, and the last is the route used to get from level 9 to level 11.

This level of the dungeon finally brings in the big bad of the whole dungeon, but he can only be reached after the party has been to level 11.

The big bad guy? It wouldn’t be Dungeons & Dragons if there wasn’t a dragon somewhere in the dungeon.

The maps on Dyson’s Dodecahedron are released for free personal use thanks to the support of awesome patrons like you over on Patreon. Every month 400 patrons come together to make these releases possible. You can help too in order to keep the flow of maps coming and to improve their quality – and even get a map of your own!