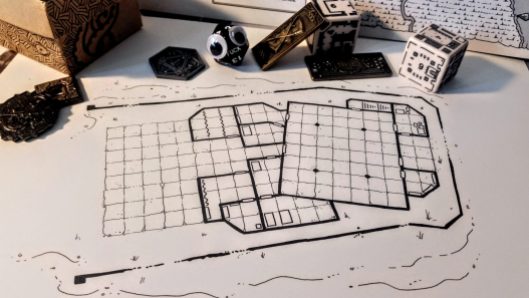 A quiet structure for the contemplation and learning about the life and trials of the paladin Eneshra and their eventual transformation into the dragon Vanshiro who flew into the west and who’s occasional returns to these lands are a mix of myth, hearth-tales, and the one time it landed on this very hill  to speak to the Grand Eclesiast and deliver the three emerald scales.

Four generations later there is no longer a Grand Eclesiast at all. One of the scales was used and destroyed in the Battle of Long River, another went missing with the last Grand Eclesiast who travelled south to find the Eye of Kin. The final scale is supposedly still here, kept under guard by the small number of faithful priests and paladins who maintain the reliquary.

This map is made available to you under a free license for personal or commercial use thanks to the awesome supporters of my Patreon Campaign. Over 400 amazingly generous people have come together to fund the site and these maps, making them free for your use.

Because of the incredible generosity of my patrons, I’m able to make these maps free for commercial use also. Each month while funding is over the $300 mark, each map that achieves the $300+ funding level will be released under this free commercial license. You can use, reuse, remix and/or modify the maps that are being published under this commercial license on a royalty-free basis as long as they include attribution (“Cartography by Dyson Logos” or “Maps by Dyson Logos”). For those that want/need a Creative Commons license, it would look something like this:

Cartography by Dyson Logos is licensed
under a Creative Commons Attribution 4.0 International License.