By thal in Maps on 26 septembre 2017.
Beneath the city streets are the sewers, of course, and the basements and lower levels of important temples and clanhouses. But also the ruins of parts of the city that were here before the last ditlana (the ritual destruction of the old city to build anew) – some parts kept because it was just easier to build over them, others because of the political clout of the organizations using them.

This is the fifteenth map in the “My Private Jakalla” project to make a set of maps that interconnect to produce something thematically similar to the original Jakallan Underworld map that M.A.R. Barker used in his Empire of the Petal Throne games.

This section of the undercity is getting closer to the river (where the sewer outlets are) and beyond this point there are fewer underground structures and more of them are flooded or severely water damaged. But one large substructure dominates this section with fine strong masonry that keeps the area dry and stable. This temple structure has a secured accessway to the “highway” sections in maps 1C and 1D and is linked by recent digging in the lower-left portion of the map to some decrepit areas that eventually lead to map 1B.

Disconnected from all this is the ruins of the previous understructure of the same temple slightly to the south of the current location which is only accessible from map 1N.

The majority of this region is a fairly active part of the undercity. The 20′ wide passage that links down to 1C and 1D is used as a thoroughfare for the temples along it when trading with each other as well as when just wanting to communicate during the day in order to avoid walking through the city streets in the heat. Only the older structures in the lower left area are not in active use by any of the temples and are kept locked off from the main chambers and passages with barred and locked doors. 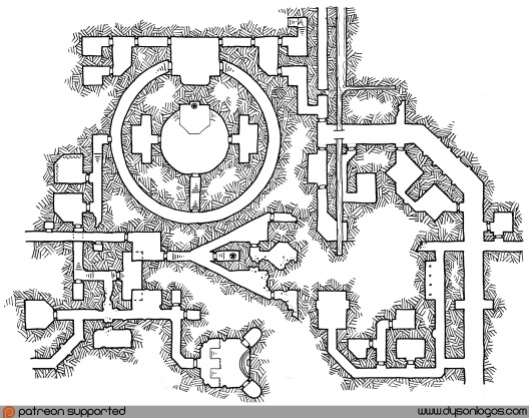 Surface access to this map is via the temple above the circular structure and there are no accesses to the lower levels of the undercity from this area.

The maps on Dyson’s Dodecahedron are released for free personal use thanks to the support of awesome patrons like you over on Patreon. Every month 400 patrons come together to make these releases possible. You can help too in order to keep the flow of maps coming and to improve their quality – and even get a map of your own!