The Dungeons of Kal Odun

Downhill from the old ruins of Kal Odun, the dungeons remain the one intact part of the dark fortress. The dungeons were used to house political prisoners and as the home for the Bound Prince – the mummy lord that lead the elite troops of the fortress. 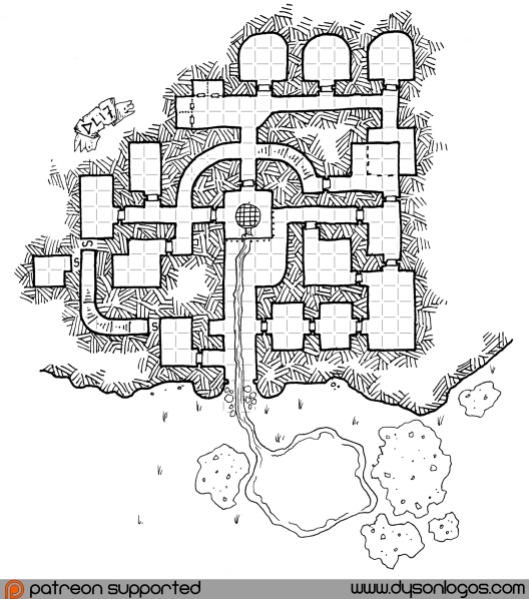 The Dungeons of Kal Odun

The entry to the old dungeons is just behind a spring-fed sulfurous pond. A small stream leads from the pond into the dungeons proper, where it runs down the wall of a 30 foot drop to the lower levels. On rainy years, the drainage well fills up with the overflow, and the waters can rise as much as six feet above the floor level of the lower level – and the story of the escape of Prince Tauell occurs during a massive storm where the entire lower level was flooded with the waters threatening to overwhelm the ground floor of the dungeons. 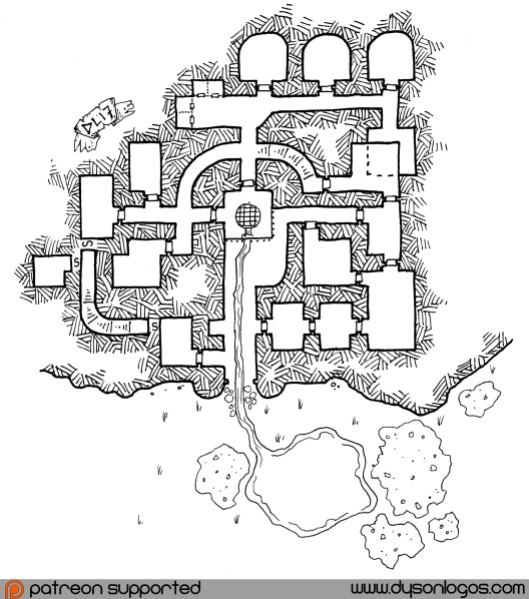 The Dungeons of Kal Odun (no grid)

This map is made available to you under a free license for personal or commercial use thanks to the awesome supporters of my Patreon Campaign. Over 400 amazingly generous people have come together to fund the site and these maps, making them free for your use.

Because of the incredible generosity of my patrons, I’m able to make these maps free for commercial use also. Each month while funding is over the $300 mark, each map that achieves the $300+ funding level will be released under this free commercial license. You can use, reuse, remix and/or modify the maps that are being published under this commercial license on a royalty-free basis as long as they include attribution (“Cartography by Dyson Logos” or “Maps by Dyson Logos”). For those that want/need a Creative Commons license, it would look something like this:

Cartography by Dyson Logos is licensed
under a Creative Commons Attribution 4.0 International License.